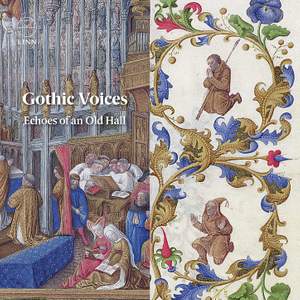 Echoes of an Old Hall

Among the earlier pieces here is probably Leonel Power’s Gloria, whose acerbic clashes and angular, thrusting lines are fashioned by these singers into a compelling sonic journey. The slightly... — BBC Music Magazine, October 2021, 4 out of 5 stars More…

Gothic Voices’ eagerly awaited new album features music from The Old Hall Manuscript: a wonderful collection of classy compositions from late fourteenth- to early fifteenth-century England. It embodies the English ‘flavour’ of music of the time, with its smooth melodies and sweet harmonies, irresistible to Franco-Flemish composers writing a generation or so later, and known by them as the ‘Contenance Angloise’. This highly expressive and quirky music, ranging in atmosphere from gently suave strains to high-octane cascades of sound, benefits from the gorgeous acoustics of Boxgrove Priory. English music by Cooke, Power, Pycard and Dunstable is answered by Burgundian composers Dufay, Lymburgia and Binchois, thus demonstrating the influence of said English Countenance, and hearing its echoes in the response. This is Gothic Voices’ fourth album for Linn following its first recording of mediaeval Christmas music, Nowell synge we bothe al and som, and two thematic programmes, The Dufay Spectacle and Mary Star of the Sea, each of which received widespread critical acclaim.

Among the earlier pieces here is probably Leonel Power’s Gloria, whose acerbic clashes and angular, thrusting lines are fashioned by these singers into a compelling sonic journey. The slightly later English style of sweet concordant harmonies (called by the Burgundians the ‘contenance angloise’) perfectly suits their expertise in close harmony.

Perhaps most unexpectedly of all, the account of Dunstable’s four-voice Veni Sancte Spiritus (one of the best-known, oft-recorded pieces of the 15th century) is unquestionably one of the finest yet made.