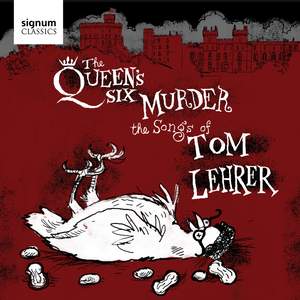 The Queen's Six Murder the Songs of Tom Lehrer

Tom Lehrer: I Got It From Agnes

Tom Lehrer: We Will All Go Together When We Go

Following Tom Lehrer’s decision in 2020 to release almost 100 of his songs into the public domain (for anyone to perform and adapt without permission) The Queen’s Six take up the offer with relish in this album of a cappella renditions of his “catchy and savage musical satire”.

Based at Windsor Castle, the members of The Queen’s Six make up half of the Lay Clerks of St George’s Chapel, whose homes lie within the Castle walls. This rare privilege demands the highest musical standards, as they sing regularly for the Royal family at both private and state occasions. In 2018 this included the wedding of Prince Harry and Ms Meghan Markle, held in St George’s Chapel. Most significantly however, it is the familiarity of living and singing together in Chapel every day that lends this group its distinctive closeness and blend, as well as an irresistible informality and charm.

The actual singing is astonishingly accomplished.

The only things being murdered here are those park-dwelling pigeons – Lehrer’s songs (which he effectively released into the public domain last year) lose none of their acerbic sparkle in these terrific new a cappella arrangements by members of the Windsor-based vocal ensemble and friends, with the interplay between voice-parts providing additional comedy and the pure-toned upper voices lending a deliciously deadpan charm to the sagas of Oedipus, Alma, Agnes et al.