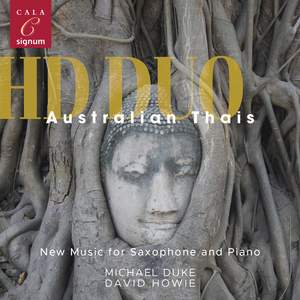 Australian and Thai composers took part in a crosscultural exchange programme to commission and workshop these new works. The saxophone and piano are pushed to their limits and heard here in... — BBC Music Magazine, October 2021, 3 out of 5 stars More…

Dargaville: Water Has No Equal

I. The Chant of Rattanatri

The initial impetus of the ‘Australian Thais’ project came from David Howie’s Thai family connections and the shared interest to explore the connections between the music and people of both countries. This led to collaborations with some of Thailand and Australia’s premiere composers to commission, workshop and produce new music for a cross-cultural exchange aimed at enhancing and strengthening links between the two countries, greatly increasing cultural awareness and understanding through music. This project was made possible by a Sydney University, Conservatorium of Music internal research grant.

As well as performing regularly across the major cities of Australia, HD Duo have also appeared in concert throughout the world in countries such as Thailand, USA, Singapore, UK, France, Malta, Cyprus, Sri Lanka, Canada, Croatia, Mexico and French Polynesian New Caledonia.

Australian and Thai composers took part in a crosscultural exchange programme to commission and workshop these new works. The saxophone and piano are pushed to their limits and heard here in interesting new ways.