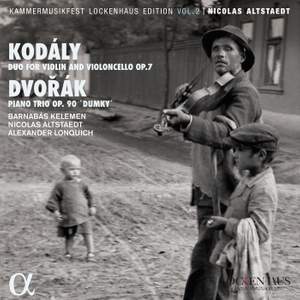 While every phrase is carefully considered, each one is communicated with passion...Everywhere there is a wealth of fascinating detail…Some may find the players’ approach a little too intense,... — BBC Music Magazine, September 2021, 5 out of 5 stars More…

Recording of the Week,  Kodály and Dvořák from Barnabás Kelemen, Nicolas Altstaedt, and Alexander Lonquich

The violinist and cellist display a truly remarkable synergy in Kodály's Duo from 1914, whilst all three musicians capture the 'Dumky' Trio's rapid shifts between melancholy and boisterousness to perfection.

After the success of the recent recording of works by Veress and Bartók, which won both a Gramophone Award and a BBC Music Magazine Award in 2020, the Lockenhaus Festival series, curated by its artistic director Nicolas Altstaedt, continues its journey through central Europe with Antonín Dvořák and his famous ‘Dumky’ Trio, named after a genre of Slavonic folksong generally performed by blind wandering minstrels who accompanied themselves on the kobza or bandura (twelve-string lute). Dvořák, whose father played the zither, immersed himself in this music and creatively translated its substance into his own music. The trio was premiered in 1891 and, in response to its ecstatic reception, Dvořák decided to perform it during his grand farewell tour before leaving for the United States. Zoltán Kodály’s Duo for violin and cello (1914), which completes the programme, also bears witness to the influence of folk music.

While every phrase is carefully considered, each one is communicated with passion...Everywhere there is a wealth of fascinating detail…Some may find the players’ approach a little too intense, but for wholehearted commitment these performances are outstanding.

No player currently treading the boards is quite as exciting [as Kelemen] and this extraordinary disc finds him in intimate and animated musical conversation with like-minded musicians.