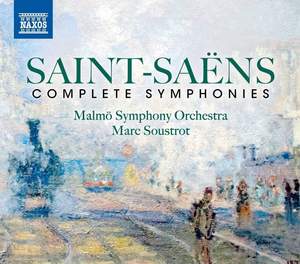 Saint-Saëns wrote five symphonies between the years 1850 and 1886. The cycle began with the Mozart-influenced Symphony in A but as a precocious composer of 17 he wrote his first numbered symphony, a work much admired by Berlioz and Gounod. He progressed to his most popular piece in the genre, the groundbreaking Symphony No. 3 with its inclusion of organ and piano. This critically admired cycle includes a sequence of atmospheric and dramatic symphonic poems, including Phaéton and the ever-popular Danse macabre.