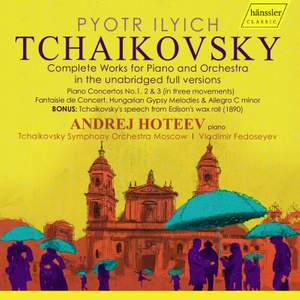 "All Tchaikovsky's works for piano and orchestra exist in multiple versions. The aim of this Edition is to present the unabridged versions of Tchaikovsky's works for piano and orchestra as a box set. It took some considerable time till Hoteev gained access to those papers whose mere existence represented a hidden danger to the re-writing of history demanded by Socialist Realism: ""After the Revolution, Tchaikovsky was made into a champion of the people,"" says Hoteev. ""There was a line of research that set out to 'discover' how Communism was heralded in the works of Tchaikovsky, of Pushkin and Tolstoy. After Andrei Hoteev had finally succeeded in assuring the supervisory board of the Tchaikovsky Museum in Klin outside Moscow of his very best intentions, the strictly confidential classified material was gradually made available. Born in St Petersburg (known then as Leningrad), Andrei Hoteev is one of the most influenti al and intriguing Russi an pianists of our time. Alongside his piano studies, Andrej Hoteev engaged in detailed musicological research, which Ied him time and again to discover various composers' original scores."