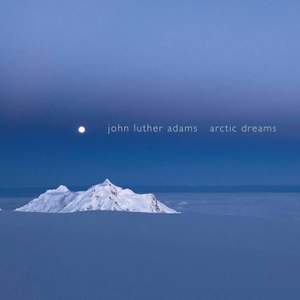 No. 1, The Place Where You Go to Listen

No. 2, Pointed Mountains Scattered All Around

No. 3, The Circle of Suns and Moons

No. 5, River with No Willows

No. 6, One That Stays All Winter

No. 7, Where the Waves Splash, Hitting Again and Again

“This was the first music I composed in my ‘aeolian’ sound world, which grew out of my experiences listening to wind harps on the tundra. As in several of my later string quartets, all the sounds are produced by natural harmonics and open strings. . . . Extensive retuning of the strings is employed.

“The sung text is a series of ‘Arctic Litanies,’ composed of the names of Arctic places, plants, birds, weather, and the seasons, in the languages of the Iñupiat (Alaska Inuit) and Gwich’in (Athabascan) peoples of Alaska.

“Arctic Dreams is dedicated to the memory of my dear friend Barry Lopez, and is titled after one of his greatest books.” [See Adams’s remembrance of Lopez from Harper’s magazine.]

Performed by the incredible Synergy Vocals, a critically acclaimed vocal ensemble that has during the past 25 years recorded music by Steve Reich, Louis Andriessen, David Lang, Luciano Berio, James MacMillian, Steven Mackey, John Adams, Arvo Pärt, and many other composers and performed with the Boston, Chicago, St. Louis, and San Francisco Symphonies, the Los Angeles and New York Philharmonics, as well as other major orchestras and many chamber ensembles. Their performances and recordings have been deemed “amazing” (New York Times); “beautiful, haunting” and “wonderfully transparent” (Gramophone); “superb” (The Guardian); “dazzling” (The Observer); “exquisite” (Financial Times); and “blazing and stunning” (The Herald, Scotland). With Synergy Vocals is a quartet of notable string players, all specialists in new music: violinist Robin Lorentz, violist Ron Lawrence, cellist Michael Finckel, and bassist Robert Black.

John Luther Adams is a Pulitzer- and Grammy-winning composer who lived for many years in Alaska, where his work derived much of its unique character from the landscape and weather of the Great North. About a half-dozen years ago, he moved from Alaska, living in various desert and mountain areas in South and Central America—places that also inspired and found expression in his music. He currently resides in rural New Mexico. He is a long-time associate of the Cold Blue label; his music has appeared on seven previous Cold Blue CDs.

“One of the most original musical thinkers of the new century.” — Alex Ross, The New Yorker

“Adams’s music sounds like it has nothing to accomplish. It simply exists, hanging in mid-air, waiting to be listened to.” —All-Music Guide

“Adams’s music is as hypnotic as it is different.” —MusicWeb Int’l

“Adams’s powerful music finds inspiration, depth of field, and sonic substance in the shapes and textures of the natural world and, most of all, in the composer’s own deep and passionate commitment to the act of listening itself.” —Dusted magazine