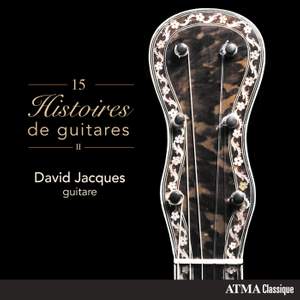 "Intimate, enchanting and delicately emotional, this album is the perfect introduction to the world of historical classical guitar a way to explore the delicacies of their different timbres beautifully highlighted by David Jacques."

Guitarist David Jacques returns with a second volume of Histoires de Guitares (Guitar Stories), featuring 15 historical guitars from his private collection, most of them built by the best 19th century luthiers. Each guitar is featured in repertoire that suits the instrument's character, and each has a story to tell.

15 Guitar Stories follows on the success of volume I, 14 Guitar Stories, released in January 2020 and nominated for a 2021 Opus Prize. In the early 1800s, the fruitful collaboration between composers and guitar-makers greatly enabled the instrument's evolution, thanks to a variety of models, materials, and techniques. The guitar was considered the most fashionable instrument of the time, a must-have in 19th century music halls and European courts.

Guitarist and lutenist David Jacques has a Ph.D. in early music performance from the Universite de Montreal. His discography consists of 50-plus recordings on the XXI-21, ATMA, Oz, and Analekta labels, several of which have been nominated for ADISQ, JUNO, Opus, and ECHO Classik prizes.