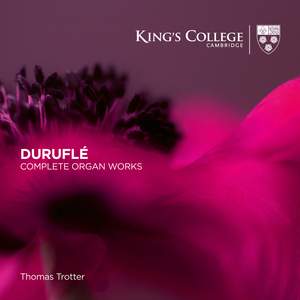 It’s music Trotter knows intimately, and it shows – even when refracted through the very English-sounding organ of King’s College, Cambridge, an instrument on which he cut his teeth as Organ... — BBC Music Magazine, September 2021, 5 out of 5 stars More…

Thomas Trotter is a prize-winning concert organist and one of the UK’s most admired performing musicians, reflected in Her Majesty The Queen awarding him The Queen’s Medal for Music on St Cecilia’s Day 2020.

For this recording of Duruflé’s complete organ works he returns to the chapel in which his extraordinary performing career began.

Trotter was the 14th organist to be awarded the position of Organ Scholar at King’s College, taking up the post in 1976. Organ Scholars at King’s are undergraduate students at the College with a range of roles and responsibilities, including playing for choral services in the Chapel, assisting in the training of the probationers and Choristers and conducting the full choir from time to time. The position of Organ Scholar is held for the duration of the student’s degree course.

It’s music Trotter knows intimately, and it shows – even when refracted through the very English-sounding organ of King’s College, Cambridge, an instrument on which he cut his teeth as Organ Scholar nearly half a century ago; having recently undergone major restoration, the pipes can respond immediately to Trotter’s often quicksilver virtuosity.

Trotter turns out performances that are top of the pile...his playing has a kind of natural empathy which so strongly inhabits the music that you almost forget that the performance is the work of a single individual player.