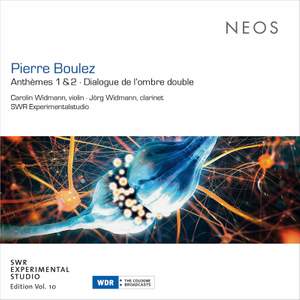 The program on this CD focuses on two essential aspects of Pierre Boulez's uvre: his love of theater and his consistent search for ways of spatializing sounds through electronics.

In "Dialogue de l'ombre double" from 1985 it is still a pre-produced tape  recorded by the interpreter himself  which, together with the live sounds, symbolizes the clarinetist's "double shadow". In "Anthèmes 2", written around ten years later, the acoustic labyrinth in which the soloist finds herself is generated entirely by means of live electronics. The basic idea for this was already laid out in "Anthèmes 1" for solo violin, created in 1991 as a mandatory work for the Yehudi Menuhin competition.

Pierre Boulez has worked with the SWR Experimental Studio since it was founded in the early 1970s. In this recording the instrumental parts were excellently cast with Carolin and Jorg Widmann.

Carolin Widmann gives glistening performances of these texturally fascinating works, while her brother, Jörg, delivers an equally alluring reading of the theatrical Dialogue de l’ombre double (1985), shadowing and reflecting his previously tape-recorded self.