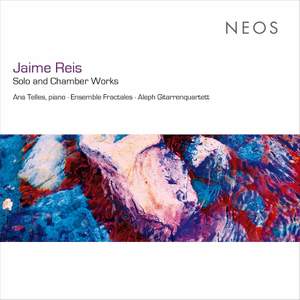 I. Âmbar (Version for Solo Clarinet)

I. Âmbar (Version for Clarinet & Piano)

With "Sangue Inverso - Inverso Sangue", the Portuguese composer Jaime Reis has created his own little cosmos: two times seven movements that can be performed separately, one after the other or at the same time. Despite very different tempos, moments of synchronization and coordination arise.

The main idea behind this structure is the relationship between the individual and the collective, more precisely: the role of the individual regardless of his integration into the collective. The Ensemble Fractales presents nine different variations of the Sangue cycle both as individually as well as simultaneously played movements.

Jaime Reis has dealt intensively with scientific topics. This is how the piano work "Lysozyme Synthesis" (Ana Telles, piano) became inspired by the process of protein synthesis, "Fluxus, Vortex - Schubkraft" (here in the acoustic version with the Aleph Gitarrenquartett) from the physical phenomenon of fluid mechanics.