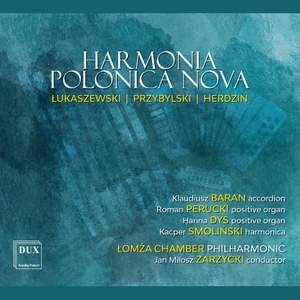 Harmonia Polonica Nova, the second album of the Witold Lutoslawski Chamber Philharmonic in Lomza, presents the genre of the concerto in the contemporary approach of Polish artists encompassing three outstanding Polish composers of contemporary music, three stylistically similar but completely different compositions in terms of character and three instruments of similar origin but completely different sound and temperament.

The main roles are performed by the accordion, two positive organs and the harmonica, instruments very close to each other in terms of their origins and at the same time strongly different in terms of their tone colour, possibilities and, above all, character. To a certain extent, all of them come from the organ and it is also the organ that contributed to the inception of this album, which only confirms the popular statement about the organ being 'the king of instruments.' Two of the three presented concertos are compositions originally written for organ and orchestra, and their history goes back over a dozen or so and more than twenty years, respectively.