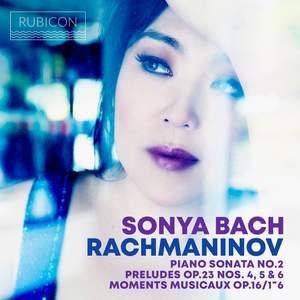 Sonya Bach takes Rachmaninov more by subtlety than by storm. This pays many dividends...Her pianism is as polished as it is poised. — Gramophone Magazine, October 2021

No. 1 in B-Flat Minor, Andantino

No. 2 in E-Flat Minor, Allegretto

No. 3 in B Minor, Andante cantabile

No. 5 in D-Flat Major, Adagio sostenuto

Rachmaninov’s 2nd Piano Sonata was extensively revised by the composer in 1931 and the revised version is tighter and thinner in texture (the 4th piano concerto is a fine example of the more restrained and less opulent textures the composer developed in his later years) than the original version of 1913. It represents a supreme challenge to the pianist in either version and has all the hallmarks of the composer at the height of his powers - he had just finished his huge choral symphony ‘The Bells’ at the same time.

The 6 Moments Musicaux Op.16 are early works which exhibit the flamboyance of the youthful virtuoso. Sonya Bach includes three of the Preludes from the Op.23 set.

Sonya Bach takes Rachmaninov more by subtlety than by storm. This pays many dividends...Her pianism is as polished as it is poised.