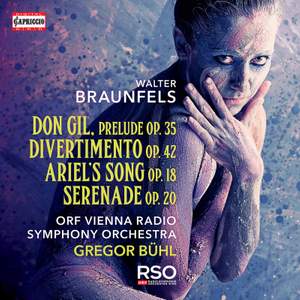 Gregor Bühl and his ORF Vienna Radio Symphony Orchestra do the honours with care and sensitivity, and the sound is excellent. So here’s to Vol 8. I can’t wait. — Gramophone Magazine, August 2021 More…

‘The audience might remember that – as a descendant of writing tonal music – I am still alive and continue composing.’ – Walter Braunfels, 1946. Walter Braunfels’ music died twice: first, when the Nazis declared his music ‘degenerate art’; and again when postwar Germany largely rejected tonal music, with arbiters of taste declaring any form of romantic music (almost the whole pre-war aesthetic) to be tainted. This ninth volume in Capriccio’s Braunfels Edition also shows us an open-minded composer who experimented with Jazz elements in his Divertimento for radio-orchestra in 1929. The programme also includes the prelude to his comic opera Don Gil of the Green Breeches, Ariel‘s Song and the Serenade in E-flat major.

Gregor Bühl and his ORF Vienna Radio Symphony Orchestra do the honours with care and sensitivity, and the sound is excellent. So here’s to Vol 8. I can’t wait.

These works from 1910 and 1920 show a versatile imagination — a disciple of Brahms in his Op 20 Serenade, of the Strauss of Till Eulenspiegel in his Don Gil overture Op 35. Music and performances that reward repeated listening.