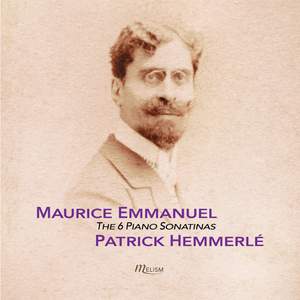 Once in a while a composer appears on the musical landscape who seems to come out of nowhere, whose roots are not easily identifiable, and whose lineage cannot be traced with any degree of certainty. Even composers considered revolutionary today - Beethoven, Scriabin or Schöneberg for instance - started out as the heirs of the preceding generation; Beethoven owed much to Haydn, Scriabin started as a Chopin worshiper, and Schöneberg was influenced by Brahms and Wagner. So, it comes as something of a shock to see that at the time when one of the most radical of all composers, namely Debussy, was writing his delightful but deeply conservative Arabesques, Maurice Emmanuel, born the same year, was writing his first Sonatine, a work that explores modality, bitonality or even tritonality (!), and more generally, tonal effects stemming out of nowhere and that were vastly ahead of their time. Nevertheless, Emmanuel is not a complete maverick. His musical language also has roots, but these roots are in a soil far more remote than his contemporaries ever dreamed of. Under the influence of Louis-Albert Bourgault-Ducoudray, his history of music teacher at the Conservatoire, he developed an interest in modal music as he heard it in renaissance polyphony. This interest was to become a passion and was to determine his destiny.