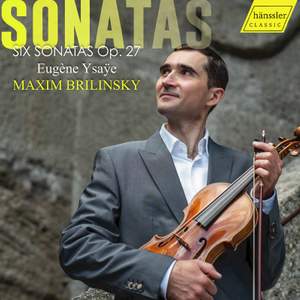 In 2021 the 90th anniversary of the Belgian violinist, composer and teacher,

Eugene Ysaye, is commemorated. The 6 sonatas op. 27 are the focal point of his musical creation. Together with Johann Sebastian Bach's Sonatas and Partitas, and Niccolo Paganini's 24 Caprices op. 1, they constitute key works in the repertoire for solo violin.

Brilinsky's intention is 'not to emphasise technique, but rather sound and above all the magnificent music must be paramount. Polyphonic like Bach, Ysaye also gives a specific stylistic portrait of each of the six violinists the sonatas were composed for.'

Highlighting association with the Vienna school, Brilinsky plays a violin made in 1862 by the Vienna luthier Gabriel Lembock, who was also responsible for string instru­ments of the Vienna Philharmonic Orchestra, founded in 1842.

Born in Lviv in Ukraine, Brilinsky began the violin as a 5-year-old in his hometown, when 15 he became a student of Michael Frischenschlager at the University of Music and Performing Arts in Vienna. Since 2011 he is a member of the Vienna Philharmonic Orchestra. In that year he won an audition for rank-and-file 1st violin, then in 2014 furthermore the position of sub-principal..