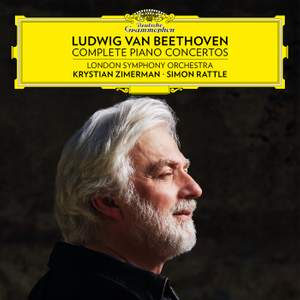 It is appropriate that the peak of Beethoven’s orchestral artistry should be scaled by two musicians also at the height of their powers: these performances are as near-definitive as I ever expect... — BBC Music Magazine, September 2021, 5 out of 5 stars More…

Krystian Zimerman, Sir Simon Rattle and the London Symphony Orchestra present Ludwig van Beethoven's 5 piano concertos. The exceptional Polish pianist Krystian Zimerman, together with Leonard Bernstein, presented an outstanding reference recording of Beethoven's Piano Concertos Nos 3, 4 and 5 more than 30 years ago (1989). At the time, both agreed on their commitment to music - in mind, heart and soul - which led to an extraordinary recording. Unfortunately, Bernstein died before the cycle was completed. In 1991, Zimerman conducted the remaining concerts No. 1 and 2 himself from the piano. “Bernstein's way of making music left a clear impression on me, “said Zimerman. “He gave me the courage and also the confidence to dare something in my interpretations to try out completely new musical ideas. [...] Conductors, it was similar — with Simon Rattle. It's like he was going to music himself — it was exactly the same with Bernstein. I never had the idea that Bernstein was conducting a piece, rather, every piece seemed to be his, he composed it while he was standing on the podium. “The unique relationship between Krystian Zimerman and Sir Simon Rattle is based on years of shared ideals and mutual respect. Gramophone Magazine described her partnership as “a matter of wonder” and praised her “exciting sense of goal.” “What happens in the concert does not necessarily resemble the rehearsal, “says Zimerman. “We are setting a frame, but he knows that I can break out at any moment, and I know he will follow at any time, and vice versa. If I allow myself to have fun, he won't let me get away with it — the rematch will follow within the next two minutes! “Now, 30 years after his first recording, Zimerman returns to Beethoven's piano concertos. It offers an exceptional reinterpretation, recorded with Sir Simon Rattle and the London Symphony Orchestra at LSO St. Luke's in December 2020, making this album the highlight of Beethoven's year 2020 and another milestone in the series of Beethoven's major recordings.

It is appropriate that the peak of Beethoven’s orchestral artistry should be scaled by two musicians also at the height of their powers: these performances are as near-definitive as I ever expect to hear...[Zimerman's] interpretations here have a fleet grace which takes the breath away.

Rattle is especially good at the Haydn-like humour of the early concertos, where Zimerman sparkles with clean-cut playing. In the later concertos, depth of feeling keeps ambushing the listener, providing a sense of discovery that is welcome from two musicians who must have performed this music so often.

Zimerman and Rattle convey the sense that, though Beethoven was entering territory essentially charted by Mozart, he consciously did so as his own man.

Zimerman has recorded these concertos before, and as magnificent as those performances with the Vienna Philharmonic are, if I had to compare the two I would say that this new set is even more alive with freedom and spontaneity…Throughout all five concertos there is a palpable feeling of joy and elation about the very act of being able to make music. This exuberance is one of the many strengths of this spirited set of performances.

What has remained constant across the decades is the unaffected clarity and beauty of Zimerman’s playing – the perfectly even execution of every run, the precise weight of every chord, the compelling articulacy of the smallest details...few convey the sense of wholeness in each work more satisfyingly than Zimerman does...By and large, Rattle’s conducting is a model of tact and good taste, never drawing attention to itself.