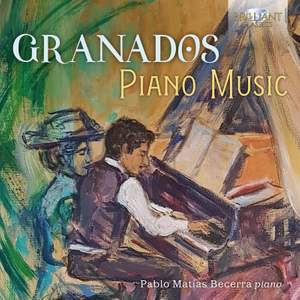 Enrique Granados, the son of an army officer, received his musical education from the town bandsman, Captain Jose Junceda, until the family moved to Barcelona.

There he studied piano with Jurnet and later composition with Pedrell, the father of the nineteenth century nationalist movement in Spain. He earned his keep by playing in a café in the evenings.

At the age of twenty, Granados went to Paris to attend the Paris Conservertoire. Upon his return to his native country in 1900 he founded the Society of Classical Concerts, becoming their permanent conductor as well as appearing as soloist. In 1901, he founded the Pianoforte School which he named the “Academia Granados”, directing it personally for fifteen years, producing many distinguished performers. In addition, Granados pursued his concert career as a pianist appearing with great success all over Spain.

Granados’ most famous piano work is the suite Goyescas. However, this new recording presents some less familiar works by the Spanish master: the 8 Poetic Waltzes, the suite Escenas Romanticas and a variety of independent pieces, among which are “El Pelele” and the popular Allegro de Concierto, music of great charm, warmth, passion and pianistic glitter.

Played by Pablo Belgian pianist Pablo Matías Becerra, who is recognized for his insightful interpretations, distinctive sound and poetic sensibility.