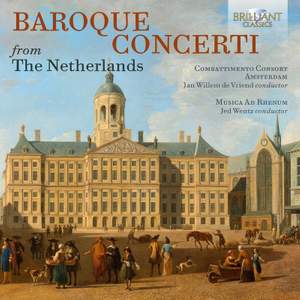 Baroque Concerti from The Netherlands

Schickhardt: Concerto for Recorder, 2 Oboes and Bassoon in G minor

Fesch: Concerto for Strings and Continuo in B flat major, Op. 10 No. 2

Hurlebusch: Violin Concerto in A minor

The 18th century Republic of the Seven United Provinces of the Netherlands served as a magnet attracting musicians from throughout Europe. It was one of the wealthiest of European countries, the fortunes amassed in the previous century - the Golden Age - could now safely be spent, and culture was an obvious choice. Many composers from abroad either visited the Netherlands or settled there permanently, such as Antonio Locatelli. It comes as no surprise that composers, both Dutch and foreign, were influenced by the great instrumental tradition brought by the Italians, and the Concerto form flourished, both as Concerto Grosso and Solo Concerto.

A collection compiled from the rich back catalogue of NM Classics, the label for Dutch music.