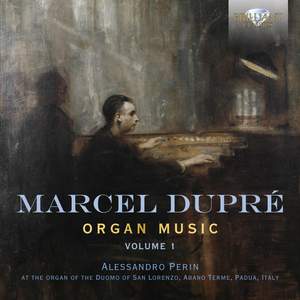 Dupré: Versets on ’Ave Maris Stella’ (from Vespers of the Virgin, Op. 18)

Dupré was unquestionably one of the most eminent figures of the French organ school in the twentieth century. He began his musical studies at the age of seven, and very quickly his prodigious gifts were recognized. He had lessons with Widor and Guilmant, and soon built an impressive international career as organist and composer. He was organist of the Paris Notre Dame between 1916 and 1920, and in 1934 succeeded Widor at the Paris St. Sulpice, with its famous Cavaillé-Coll organ.

Dupré’s organ works were strongly influenced by the possibilities of the organ he played on. His style is typically French, influenced by the harmonic language of Fauré and Franck, and inspired by Gregorian Chant, making full use of the orchestral colors and registers of the symphonic organs built in his time, especially the magnificent instruments by Cavaillé Coll.

This new recording is the first of a projected complete cycle. It contains the Suite in F minor, 4 Verses on “Ave Maris Stella”, Évocation Op. 37 and Variations sur un vieux Noël.

Italian organist Alessandro Perin plays the impressive organ of the San Lorenzo Duomo, Abano Terme, Padua, Italy, the specifications of which are included in the booklet.