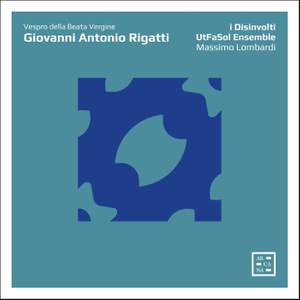 Two young Italian ensembles join forces to revive a Vespers setting of the Venetian school dating from the year of Monteverdi’s death. Regarded by musicologists as one of the leading Italian composers of the early seventeenth century, Giovanni Antonio Rigatti pursued the major part of his musical career in Venice, in the shadow of the ‘divine Claudio’.

The framework of this Vespro is taken from the 1643 collection Messa e Salmi ariosi a tre voci. The performing forces are unusual: three male voices and basso continuo, with an ad libitum choir of instruments (cornetto and three trombones). An agile, inventive and expressive setting of the Office of Vespers, which stylistically owes a great deal to Monteverdi’s Selva Morale e Spirituale, an undoubted source of inspiration for Rigatti. It contains thirteen unpublished pieces, here presented in their world premiere recording.