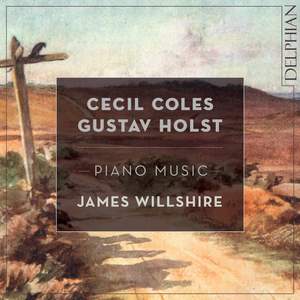 Variations (5) on an Original Theme

I. O I Hae Seen the Roses Blaw

Behind the lines of the Western Front, the young Scottish composer Cecil Coles sent his friend and mentor Gustav Holst a score, stained with mud and blood. Only one movement survived: the rest was believed destroyed by enemy action.Four months later Coles himself was killed in battle rescuing injured comrades.

James Willshire’s groundbreaking survey of his piano music reveals a composer finding his voice in pre-war Britain, France and Germany, a poignant and distinctive blend of ‘happy–sad’, as Nigel Osborne’s perceptive notes describe it.After the war, Holst’s own work shows him returning to his fascination with folk music with ‘fresh ears of almost shocking clarity’, in harmonic experiments that parallel those of Bartók.

The recital culminates in a compelling performance of Iain Farrington’s new arrangement of one of Holst’s orchestral masterpieces, a bleak, ambitious depiction of Thomas Hardy’s ‘untameable, inviolate’ Egdon Heath.

This curious juxtaposition of composers brings to light a barely known, manifestly talented Scottish figure killed at 29 in the First World War. The composer Nigel Osborne characterises Coles’s fluent idiom as “happy-sad”, and Variations on an Original Theme certainly has a memorable poignancy, salonish but a bit deeper.