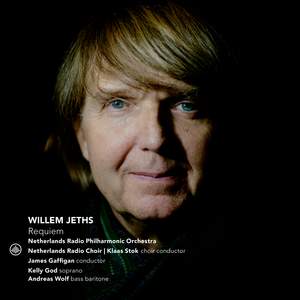 This is a powerful performance, with the orchestra and organ at full force and well balanced with the choir. Bass baritone Andreas Wolf is excellent—his intonation is spot-on and his tone focused,... — Fanfare, Nov/Dec 2021 More…

Death as a source of reflection, blinding insight or terror has become an idee fixe in the works of Willem Jeths (born in Amersfoort in 1959). Gradually, death as a topos took on the form of a philosophical question, which perhaps only found its proper place in the Requiem, with the First Symphony (CC 72693) acting as a staging post. There is a link here to a process of increasing awareness, for which Jeths sought the sounds in his second violin concerto. He said: "Death is not the final end but rather a transition to a different phase." This idea is elaborated in the Requiem in the form of a musical journey to the hereafter, taking comfort from beauty and solemn mourning.

Jeths concedes that he had no need for experiments in form, which in this case would have jarred with the intended servitude to his theme. There was no need for a full quartet of soloists; two were sufficient. The orchestral scoring, with double wind and brass, is relatively modest, although Jeths' predilection for exotic colours is evidenced by his use of soprano recorder, harp, organ and an extensive array of percussion instruments including glockenspiel, vibraphone and xylophone. This time, however, they serve a higher purpose, namely the melody. "This is my most melodious work" says the composer. The Requiem must come from the heart and the heart sings.

Willem Jeths' musical language has become gradually less atonal over the years. His most recent compositions even have a prominent ground tone. Densely orchestrated sound blocks rub along one another and overlap in an idiom that might remind one more of Ligeti or Rihm than a typical composer of the Dutch school. It is worth noting that Willem Jeths won two prices at the 1996 International Composition Competition in Vienna, for his violin concert Glenz and for his Piano Concerto. The jury included Wolfgang Rihm, Gerard Grisey, Franco Donatoni, Lothar Knessl and Friedrich Cerha - composers who, like Jeths, are intensely attuned to sound as an aspect of composition. Jeths also won the ''Amsterdamprijs voor de kunst'' for his ouvre in 2014. Although a work by Willem Jeths might suggest the existence of a clear-cut plan, forms and structures fade to the background during the composition process. Jeths is driven by spirit and fancy, unfettered by predetermined routes or goals. Because he is so conscious of the basic material, the resulting form, individual and personal, appears to the listener as a taut, consistent concept that unifies the piece. This apparently contradiction, in which aesthetics and working method seem to collide, remains one of the most intriguing aspects, both musically and personally, of Willem Jeths.

"And so this Requiem by Willem Jeths, for me one of the greatest Requiem settings ever, becomes an unforgettable musical experience in James Gaffigan's masterful interpretation. The orchestra and chorus are exceptional in their commitment and the soloists are impeccable in their dignity and naturalness." - Pizzicato

This is a powerful performance, with the orchestra and organ at full force and well balanced with the choir. Bass baritone Andreas Wolf is excellent—his intonation is spot-on and his tone focused, and every single word is clear.