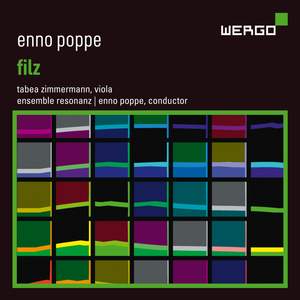 This new WERGO album brings together first recordings in studio quality of works composed especially for Ensemble Resonanz. Composer Enno Poppe has always been drawn to string instruments because of the nearly infinite possibilities to vary their pitch, playing techniques, and sound qualities. Ensemble Resonanz, based in Hamburg, has received international acclaim for its precise intonation, its fresh interpretations of both contemporary and traditional works, and its inquisitive openness to unconventional musical formats. Poppe's 'Wald' [Woods] for four string quartets (2009/10) has been a permanent feature of the ensemble's touring repertoire for many years. With its fractal relationships between the four strings of four instruments in four string quartet groupings, 'Wald' gives us the impression of directly participating in the composer's thought processes.

The German composer is addicted to one-word, typically materialistic titles for his complex, often ethereal music...It is remarkable how expansive structures grow out of endless inchoate reiteration, a process that may be schematic, but feels organic.