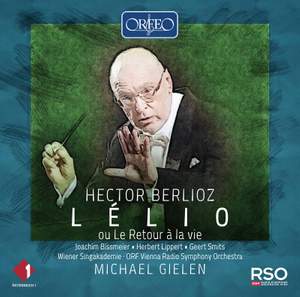 Hector Berlioz's Lélio, ou Le retour à la vie was a sequel to his Symphonie fantastique, which premiered in 1830 at the Paris Conservatory. Comprising six sections, it was composed during his travels to and around Italy, and made use of material that he had already composed for the prestigious Prix de Rome. Michael Gielen conducts the Vienna Radio Symphony Orchestra and the Wiener Singakademie with Joachim Bissmeier as narrator and highly acclaimed soloists Herbert Lippert and Geert Smits in an absorbing live recording that took place on 7 December 2000 at the Vienna Concert Hall.