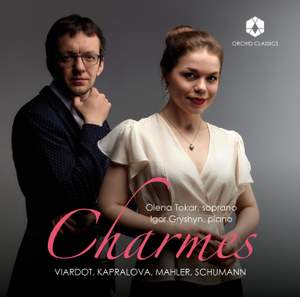 No. 2, In meines Vaters Garten

"Soprano Olena Tokar and pianist Igor Gryshyn present an exquisite recital of songs by Alma Mahler-Werfel, Clara Schumann, Pauline Viardot-García and Vítězslava Kaprálová. Alma Mahler-Werfel wrote over 50 songs relatively early in her life, and the selection performed on this album reveals her talent for expressive word-setting in a rich, atmospheric style. Clara Schumann was recognised as a child prodigy for her abilities both as a pianist and as a composer, and her songs, including the Op. 12 songs heard here, were co-published alongside those of her husband, Robert. Pauline Viardot-García was a polymath whose three-octave singing range inspired many composers. She wrote over 100 songs of her own in an array of styles; those chosen for this recital demonstrate the quality and variety of her output. Vítězslava Kaprálová produced a remarkable amount of music, much of it published during her short life, including songs that exude a perfumed impressionism."

The luxuriant bloom of Tokar’s voice is perfectly matched by Gryshyn’s old-fashioned, elastic piano accompaniments. Tempo choices are generous and unhurried...Tokar and Gryshyn fully inhabit the joys, passions and pains of this music. The recorded sound evokes the intimate and warm chamber setting to which this music belongs.

The young Ukrainian certainly supplies charm aplenty on this terrific debut solo CD of music by female composers (particularly in the florid lines of Pauline Viardot-Garcia’s dark fairytale Nixe Binsefuss), but her lyric soprano also has plenty of bite when required. The five songs by Vítězslava Kaprálová (who died aged just 25) have an other-worldly, Debussy-ish opulence that testifies to a hugely distinctive voice cut down in its prime.