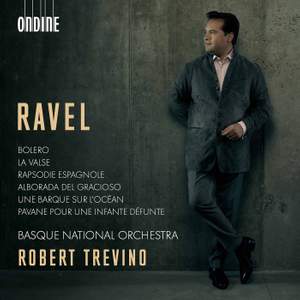 The discipline and quality of the playing is immediately evident in La valse…Yet the salient quality of Trevino’s approach is his preference for slowish tempos and the care he brings to details... — BBC Music Magazine, June 2021, 4 out of 5 stars More…

Conductor Robert Trevino's new album release on Ondine – after a successful debut with a complete Beethoven symphony cycle – features six orchestral pieces by Maurice Ravel (1875–1937), one of the most famous Basque composers, played by the Basque National Orchestra. Born in a small town in France very close to the Spanish border, Ravel spent most of his life in Paris. However, he was extremely proud of his Basque background having absorbed himself to the culture already as a child, and many elements of Basque music can be found in his compositions. In this historic release, we can finally hear Ravel's orchestral music being interpreted by Basque musicians in the form of the Basque National Orchestra. These performances on some of the most fantastic orchestral scores of the 20th Century also shed light to the Basque influences in Ravel's music.

The discipline and quality of the playing is immediately evident in La valse…Yet the salient quality of Trevino’s approach is his preference for slowish tempos and the care he brings to details and dynamics which, in Ondine’s spaciously clear recording, enables one to hear many a tiny ingenuity or colouring of scoring that go unnoticed in more summary accounts.

I was prepared at the outset to tout the wonders of this release. Much of the program is indeed astonishingly beautiful.

Trevino doesn’t need anyone to remind him how sexy this music is and can be.