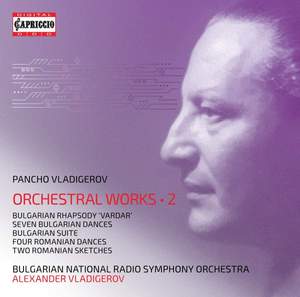 In Bulgaria, both folk and art music reveal an ancient tradition that strikes awe even in some of today's great musical nations. The way Pancho Vladigerov incorporated these folk music themes into his concert pieces shows not only his affinity for them, but also suggests that he felt something of a calling to promulgate and champion the folk traditions of his central European homeland. The most frequently performed of Pancho Vladigerov's works is undoubtedly his Bulgarian Rhapsody, Op. 16 'Vardar', written in 1922. The most outstanding must be his Seven Symphonic Bulgarian Dances, Op. 23 (1931), with which he might have wanted to create a counterpart to Brahms' Hungarian Dances, Dvořák's Slavonic Dances, Grieg's Norwegian Dances and other popular, nationalistic musical postcards.