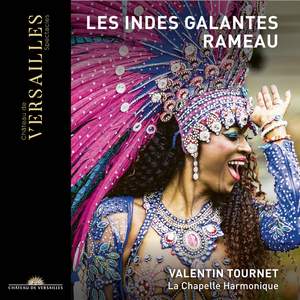 With the extra music for Amour in the Prologue, this is a welcome complement to the Budapest recording (with mostly French soloists) conducted by György Vashegyi. — Gramophone Magazine, June 2021 More…

The premiere of Rameau's first ballet opera Les Indes Galantes in 1735 was a resounding success that silenced the choir of critics who accused the composer of writing too complicated music for the time being. In the following years, the Paris Opera repeatedly put the work on the programme, with Rameau, as usual at the time, making changes, additions or cuts almost every time, including in 1761 for the last series of performances during his lifetime. Valentin Tournet and the ensemble La Chapelle Harmonique opted for this version for their recording, which can score points not least with an excellent cast of young voices.

With the extra music for Amour in the Prologue, this is a welcome complement to the Budapest recording (with mostly French soloists) conducted by György Vashegyi.

Exquisitely sung (the soloists are mostly French), the several entrées may lack a linear dramatic narrative, but the orchestral depiction of earthquakes, volcanoes and sea storms is spectacular. Tournet reveals Rameau’s astounding orchestration in all its glory.