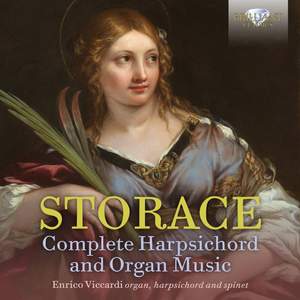 Viccardi is an able and engaging performer, and is well recorded; the instruments are all attractive sounding, particularly the harpsichord with its deep, almost bell-like resonance utterly devoid... — Fanfare, September/October 2021 More…

Storace, B: Monica - variations for harpsichord

Storace, B: Passacaglia sopra C sol fa ut per b

Storace, B: Passacaglia sopra Fe la ut per b

Storace, B: Balletto for organ

Storace, B: Toccata e Canzon (I)

Storace, B: Toccata in F (organ)

Storace, B: Recercar in e (organ)

All that we know about Bernardo Storace (1637-1664) comes from the 'Selva di varie compositioni d'intavolatura per cimbalo ed organo', a remarkable collection of works compiled by the Chapel Master of the Messina Cathedral, and published in Venice in 1664 by an unknown printer.

Far from being a bridge between Girolamo Frescobaldi and Bernardo Pasquini, as some have declared, Storace's style speaks for a degree of originality that should earn him a place among the great composers of keyboard music of the baroque period in Europe.

Enrico Viccardi chose four different instruments for this recording. A harpsichord built as a copy of a Grimaldi, a spinet modelled on the Venetian instruments of the second half of the 17th century, a Neapolitan positive organ by F. Cimino with all original pipes (first half of the 18th century) and the organ at the Collegiate Church of Santa Maria della Neve at Gualtieri (RE), which was built by Agostino Traeri (1784, main wind-chest) with sound parts by Giovanni Cipri (16th century), Carlo Lanzi (1670) and Andrea Montesanti (1788).

Enrico Viccardi is one of Italy's foremost specialists in early keyboard music, he previously recorded the complete organ works by Tarquinio Merula for Brilliant Classics.

Viccardi is an able and engaging performer, and is well recorded; the instruments are all attractive sounding, particularly the harpsichord with its deep, almost bell-like resonance utterly devoid of any tinniness. The booklet provides informative notes by Viccardi, an artist bio, sketchy data for three of the instruments, and fuller specifications for the 1784 Agostino Traeri organ.