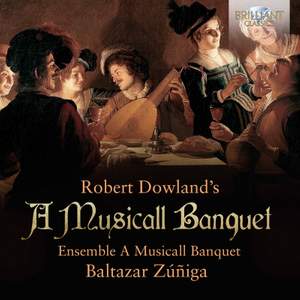 anon.: Go, my flock, go get you hence

Lady If you so spite me

Book of Songs, Book 4, "a Pilgrimes Solace": In darkness let me dwell

Robert Dowland (ca. 1591 – 1641) was an English lutenist and composer, the son of the famous lutenist and composer John Dowland. Upon the death of his father in 1626 Robert succeeded him as Royal Lutenist at the court. He published two collections of music, A Varietie of Lute Lessons and A Musical Banquet, an anthology of work by other composers including his father.

The full title of the collection is: A Musicall Banquet furnished with varietie of delicious Ayres, Collected out of the best Authors in English, French, Spanish and Italian. Composers include John Dowland, Richard Martin, Anthony Holborne, Pierre Guédron, Giulio Caccini and Robert Hales.

Baltazar Zúniga is one of the foremost tenors in today’s Early Music world. He studied with a. o. Francisco Araiza and Gloria Banditelli. As a soloist he worked with important conductors like Gustav Leonhardt, Nicholas McGegan, Frans Brüggen, Ottavio Dantone, Philippe Herreweghe, Diego Fasolis and many others.