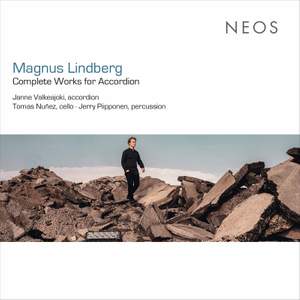 With the complete recording of the accordion works by Magnus Lindberg, Janne Valkeajoki presents an extraordinary debut album. The young Finnish accordionist has won several international competitions and has made guest appearances at numerous festivals.

On this CD, solo and chamber music works can be found; while "Jeux d'anches" (for accordion solo) and the duo "Metal Work" for accordion and percussion are original works, Valkeajoki made versions of "Dos Coyotes" (with cello) and the piano work "Jubilees" especially for his instrument. He worked closely with Lindberg, who emphasizes that the accordion versions are not just arrangements, but stand-alone works.

Magnus Lindberg has a special relationship with the accordion: as a child he took his first musical steps with it. Today he is one of the most played composers internationally.