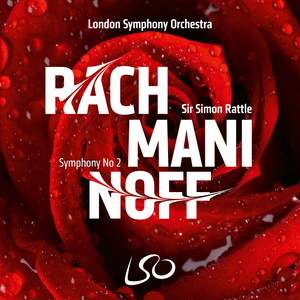 Not only does it feature superior orchestral playing, but Rattle’s wonderfully fluid approach, his magisterial control of rubato and keen sensitivity to all the different colours in this opulently... — BBC Music Magazine, May 2021, 5 out of 5 stars (Performance) / 4 out of 5 stars (Recording) More…

One of Rachmaninoff's most popular pieces, the Second Symphony is an indulgently melancholic and sentimental work: a magic box of the late-Romantic orchestra. Dramatic sections played by the full orchestra contrast heart-breaking swells that only this composer could have written. The LSO has a long history with the Second Symphony, recording it many times with conductors such as André Previn, Gennady Rozhdestvensky and Valery Gergiev. For this recording, which was captured during the opening of the London Symphony Orchestra's 2019/20 season at the Barbican Hall, the Orchestra's Music Director Sir Simon Rattle conducted from memory, performing the uncut version of this symphonic treasure.

Not only does it feature superior orchestral playing, but Rattle’s wonderfully fluid approach, his magisterial control of rubato and keen sensitivity to all the different colours in this opulently scored work all combine to produce an interpretation that keeps you engaged from the first bar to last.

The most obvious quality in this performance is its bright freshness. Rattle overturns the stereotype of Rachmaninoff as the most lugubrious of a lugubrious species, the Romantic Russian composer. Everything is light-handed, and by underplaying the score’s soaring melodies, Rattle removes any hint of Hollywood slickness, which tends to hang over performances that milk the music’s lusciousness.

There is an exciting muscularity about it, not least in the second and fourth movements – that big-boned LSO brilliance being a key factor.