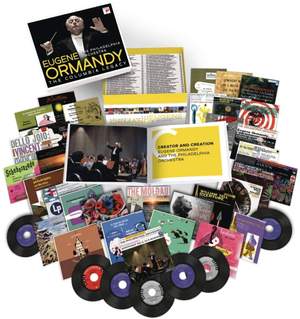 Sony Classical is pleased to release the complete monaural American Columbia discography of Eugene Ormandy and the Philadelphia Orchestra in a vast box set of 120 CDs, all in new remasterings. Almost all of this material will be appearing for the first time on CD on Sony Classical. Indeed, 152 of these recordings have never been released at all on CD before now. Ormandy took over the Philadelphia’s music directorship from Leopold Stokowski in 1938 and held the position for 42 years. During that time – in which his name and the orchestra’s became inseparable – he cultivated and further developed the voluptuous sound that originated with his predecessor. Ormandy and his Philadelphians were among the most prolific recording artists of all time. Between 1944 and 1968 (preceded and followed by contracts with RCA Victor), they were associated exclusively with American Columbia.

Ormandy was a committed recording enthusiast, working quickly and readily accommodating the company’s planning in order to produce best-sellers. His frequent tours with the orchestra were aimed not just at added exposure but also at boosting record sales. The Philadelphia’s UK tour in 1949 marked the first time an American orchestra had performed overseas since before the war. Over the years, Ormandy was sometimes criticized for his increasingly conservative, crowd-pleasing programming, but he was also responsible for numerous premieres in Philadelphia, championed the music of Bartók (a personal friend), and was the favoured interpreter of Rachmaninov. His 1952 Philadelphia recording of Honegger’s oratorio Jeanne d’Arc au Bûcher (the only previous version was a Belgian performance from 1943) was hailed by Gramophone as “a beautiful American performance (in French) on finely engineered records... Vera Zorina [as Joan of Arc]...caught me off guard and moved me greatly”.