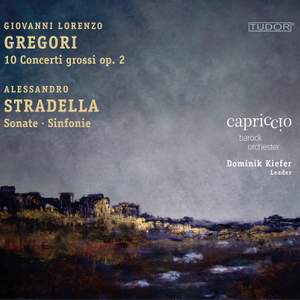 Stradella: Sinfonia in D Major 'A due concertini distinti'

No. 1a, Sinfonia. Allegro

No. 1b, Sinfonia. Andante

Giovanni Lorenzo Gregori (1663 1745), Maestro di capella amenissimo, bravo sonatore di violino, worked predominantly in his hometown of Lucca. His main work, 10 Concerti Opus 2, is an almost visionary achievement, in particular because he expressly called for a powerful orchestral sonority. Each Concerto has its own varied and multifaceted character. The solo passages of both violins are but short interludes. The accent is on the lively orches- tral idiom and its many surprises; previously unheard of combina- tions of string instruments are as thrilling as the transparent and lively dialogues within the orchestra. Alessandro Stradella (16441682) was constantly involved in love affairs and other incidents: the last ended in his murder on the Piazza Bianchi in Genoa. This did not deter from the quality of his compo- sitions. In many ways his works still appear modern, thanks to his gift for combining different orchestral timbres and volumes, and involving the players in inspiring exchanges and mutual imitations.