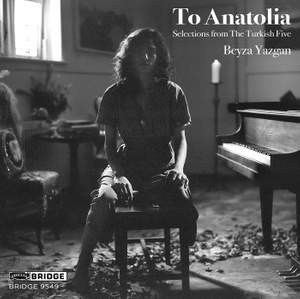 Selections from the Turkish Five

“To Anatolia” is Turkish/American pianist Beyza Yazgan's passionately played collection of Turkish classical piano repertoire from a group of composers known as “The Turkish Five”: Cemal Resit Rey (1904-1985), Ferid Alnar (1906-1978), Ulvi Cemal Erkin (1906-1972), Adnan Saygun (1907-1991), and Necil Kazim Akses (1908-1999). The music was composed between 1931-1976 with most of the pieces inspired by Anatolian folksongs, stories, dances, dirges, and lullabies. Though the compositions were all written for piano, the colours and influences of eastern instruments are present throughout.