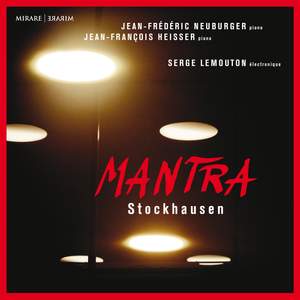 An homage to Karlheinz Stockhausen (1928 - 2007), pioneer of electroacoustic music, who described the genesis of his work, ‘Mantra’, accordingly: “I was sitting next to the driver, and I just let my imagination completely loose... I was humming to myself... I heard this melody - it all came very quickly together: I had the idea of one single musical figure or formula that would be expanded over a very long period of time, and by that I mean fifty or sixty minutes. And these notes were the centers around which I’d continually present the same formula in a smaller form... I wrote this melody down on an envelope.”

Created in 1970, ‘Mantra’ is composed for an ensemble of two pianos, wood block, antique cymbals and a ring modulator - reproduced today by synthesized electronics. - ‘Mantra’ is an emblematic work of its time, a founding moment of the psychedelic explosion of the 1970s.