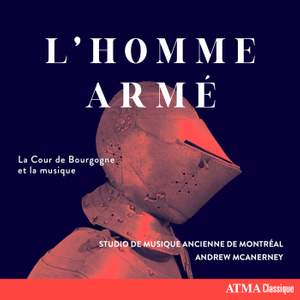 L'homme arme is a musical journey into the music of the Court of Burgundy in the 15th century. Under the direction of Andrew McAnerney, the Studio de musique ancienne de Montreal offers a program of motets by the first Franco-Flemish polyphonists - Guillaume Dufay, Antoine Busnois, Josquin des Pres and Gilles Binchois (whose motet A solis ortus cardine is recorded for the first time). Sung a cappella or accompanied by sackbuts, this music reflects the subtle art of vocal counterpoint. Praised for its "rich-textured, vibrant sound" and "hypnotic beauty", the Studio de musique ancienne de Montreal (SMAM) has established a reputation as Canada's finest early music vocal ensemble. Founded in 1974 by Christopher Jackson, Rejean Poirier and Helene Dugal, the Studio's mission is to perform sacred and secular early music, with a particular focus on choral works composed before 1750. Acclaimed for his early music interpretations, Andrew McAnerney has directed the Studio de musique ancienne de Montreal since 2015. A former member of the Tallis Scholars, Andrew's career has included music making in over 20 countries with many of the world's foremost early music ensembles. McAnerney is passionate about musical excellence and accessibility. He regularly prepares his own early music scores from original sources, and is fascinated with presenting rediscovered works.