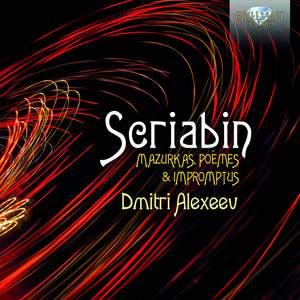 I would not be surprised to hear that Alexeev kept scores of Scriabin under his pillow. He brings a lifetime of experience to this music. Only eight of the 70 tracks here are longer than six... — Fanfare, September/October 2021 More…

No. 1 in B Minor: Tempo giusto

No. 3 in G Minor: Allegretto

No. 5 in D-Sharp Minor: Doloroso

No. 6 in C-Sharp Minor: Scherzando

No. 7 in E Minor: Con passione

No. 2, Nocturne in D-Flat Major

No. 2 in C Major: Allegretto

No. 5 in C-Sharp Minor: Agitato

No. 6 in F-Sharp Major: Allegretto

No. 7 in F-Sharp Minor: Moderato

No. 8 in B Major: Allegretto

No. 1 in D-Flat Major: Allegro

No. 2 in F-Sharp Major: Piacevole

- This is the third and last installment of Dimitri Alexeev’s recording of the complete piano works by Alexander Scriabin: the Poèmes and Mazurkas.

- Scriabin was a great admirer of Chopin and his early works are greatly influenced by the Polish genius. However Scriabin went his own way and developed a highly individual tone language, based on “mystical” chords and seeking a new spirituality based on his own esoteric and theosophical ideas.

- The short pieces presented here are fascinating specimens of Scriabin’s evolution, from Chopin-adept to a musical visionary. It includes the complete Mazurkas, the Polish dance immortalized by Chopin, and the complete Poèmes, short epigrams often expressing only one, fleeting idea, from the dreamlike to the satanic. Also includes are all other short pieces by Scriabin: Morceaux, Nocturnes, Pièces, Danses and the mighty Fantasy Op. 28.

Dmitri Alexeev is one of the foremost Russian pianists of today. He played with all important orchestras and conductors, and extensively recorded for EMI. His previous Scriabin recording for Brilliant Classics include the Complete Sonatas, Preludes and the Complete Études, all were hailed enthusiastically by the international press: “He emphasizes the music’s lyrical beauty without sacrificing energy or forward mobility…few recordings are so intrinsically beautiful as Alexeev’s.” Jed Distler on Classicstoday.com.

I would not be surprised to hear that Alexeev kept scores of Scriabin under his pillow. He brings a lifetime of experience to this music. Only eight of the 70 tracks here are longer than six minutes, and as a miniaturist, Alexeev brings exceptional poetry and nuance to each little piece…you can’t go wrong with Alexeev in this repertoire.