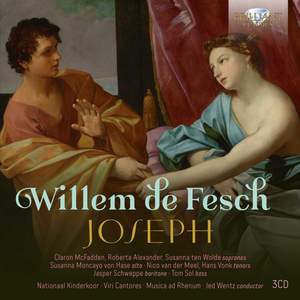 - Willem de Fesch (1687-1761), of Flemish ancestry, was born in the Dutch city of Alkmaar. He and his parents went back to Liege (Belgium) for several years, bit Willem returned to Amsterdam where he became a celebrated musician and composer. After a tenure as choir master in Antwerp he left for London in 1730 where he stayed till his death in 1761, a successful composer and violinist.

- De Fesch’ oratorio Joseph was premiered in 1745 at Covent Garden. Written in the grand Handel Oratorio tradition it features recitatives, dramatic arias and duets and choruses.

- The performance is on period instruments by Musica ad Rhenum conducted by Jed Wentz, the soloists include Claron McFadden, Roberta Alexander, Tom Sol, Nico van der Meel and others.