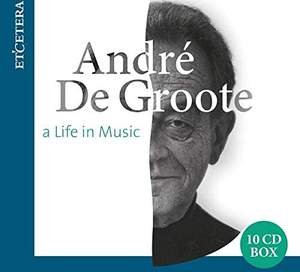 Greef: Piano Concerto No. 2 in B flat minor

Brahms: Variations on a theme by Schumann for four hands, Op. 23

A new 10 CD box set at a special price. A prize-winner in a number of important contests, the eminent Belgian pianist Andre De Groote was awarded the Harriet Cohen Medal in London and was a laureate of the Tchaikovsky (Moscow), Queen Elisabeth (Brussels) and ARD (Munich) competitions, all of which gave him access to the world´s major musical venues. His art has thus been widely heard. He has appeared with such distinguished conductors as Dean Dixon, Neeme Jarvi, Michael Gielen, Christoph Eschenbach, Igor Markevitch...his chamber music activities include close association with the Chilingirian and Via Nova string quartets, the violinists Yayoi Toda and Augustin Dumay, while his duo with the cellist Viviane Spanoghe has become a landmark in Belgian musical life. Together they have recorded works by Beethoven, Brahms, Britten, Enesco, Jongen, Shostakovitch, Tournemire and Vierne. This mammoth 10CD box set offers wide-range repertoire includes some 50 concertos, Brahms´ entire output for solo piano (all of which has been recorded), Beethoven's 32 piano sonatas that he performed three times in Brussels, at the Beethovenhaus in Bonn, in Zaragoza (Spain), and in Hiroshima (Japan); the recording of these sonatas has just been re-issued by Etcetera.