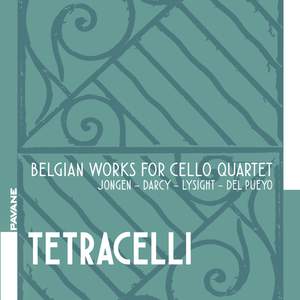 Tetracelli was born out of two passions: passion for the cello, and love of chamber music. Now in its eighth year of existence, the ambitions of this Brussels-based cello quartet are to promote its unusual instrumentation and celebrate its rich potential and range of colors.

Thanks to the precious legacy of the historic Quatuor de Violoncelles de Bruxelles (the Brussels Cello Quartet), Tetracelli has a goldmine of repertoire to explore and share with its audiences. The Brussels Cello Quartet existed between 1934 and 1939. Their repertoire included both original compositions and arrangements. The vast majority of these works have remained unedited. Amongst these are many marvelous compositions which are also an extraordinary heritage, bearing witness to cultural life in Belgium in the 1930s.

In the same vein as their predecessors, TetraCelli loves new music and commissions and performs contemporary works from composers such as Michel Lysight, which is featured on this disc.