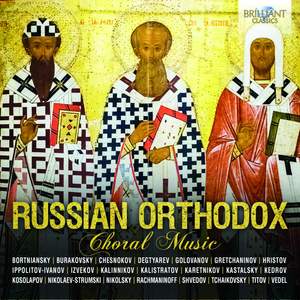 An excellent introduction to Russian Orthodox music. The singing is earthy, passionate and blessed with those uniquely low basses. — BBC Music Magazine, April 2021, 4 out of 5 stars

Degtyarev: Let all the Peoples

Short Litany: Glory Be to the Father

Glory Be to Thee

Hymn of the Cherubim

The Mercy of Peace

Amen, and With Thy Spirit

Praise Ye the Lord from the Heavens

Blessed Be He That Cometh in the Name of the Lord

Grechaninov: Come, Let Us Bow Before the Lord (Sung in Russian)

Ippolitov-Ivanov: This Day All People Bless (Sung in Russian)

Kastalsky: Appeal of the Patriarch Hermogenes to the Insurgents in 1609 (Sung in Russian)

Kastalsky: Tropary to the Holy Martyr Hermogenes (Sung in Russian)

Grechaninov: The Liturgy of St. John Chrysostom No. 3, Op. 79

Chesnokov: From My Youth (Sung in Russian)

Nikolsky: Hvalite imia Ghospodne (Praise the name of the Lord)

Dostoino yest' (It Is Meet)

Let Us Pray to the Holy Virgin (Sung in Russian)

On the sick bed

No. 5, Holy Virgin Ever Vigilant in Prayer

No. 6, Kontakion to St. Nicolas

Kastalsky: Thou who wert announced in the psalms

Kastalsky: Since My Youth Many Passions Assail Me

Kastalsky: Tropary for the Feast of the Christianization of Russia

Chesnokov: Lord, Save Thy People

Grechaninov: Let All the Earth Praise the Lord

Kalistratov: Lord, Cleanse Me of My Sins

8 Spiritual Songs to the Memory of Boris Pasternak

No. 1, For Taking Monastic Vows

No. 2, Of the Prophet of Sophonias

No. 3, Prayer for Salvation

No. 7, Praise ye the name of the Lord

Blessed Is the man

Hexapsalms: Glory to God on high

Glorifying song of the Resurrection: Teach me O lord in the way of truth

Hymn of Resurrection: We have seen the resurrection

Magnificat: My soul proclaims the greatness of the Lord

Great Doxology: Glory be to God on high

Resurrection hymn (Troparion): This day of salvation has come to the world

Resurrection hymn (Troparion): When you had risen

A history of Russian Orthodox sacred music from the ‘Moscow Baroque’ to the present day, including many rare and long unavailable recordings.

This renaissance was foreshadowed by Tchaikovsky’s setting of the Liturgy of St John Chrysostom in 1878 – in its time a controversial work, rejected by the Church – and reached its zenith with the two sacred cycles by Rachmaninoff: another setting of the Liturgy and then his religious masterpiece, the Vespers (All Night Vigil) of 1915. Once more suppressed by the 1917 Revolution, an authentic strain of Russian sacred music had to wait until the era of glasnost in the late 1980s and early 90s

Rybin Male Choir could once more be formed to sing and record the repertoire that is their country’s musical inheritance, and most of these recordings date from the early 90s, first released on the ‘Saison Russe’ imprint for its renewal. Ensembles such as the of the Chant du Monde label, long unavailable and now reissued here for the first time.

As well as the composers mentioned above, the box surveys many lesser-known figures, mostly from the pre-Revolutionary era such as Alexander Nikolsky, Nikolai Kedrov and Konstantin Shvedov, as well as the Six Chants Op.1 by a figure more familiar as an inspirational conductor, Nikolai Golovanov. The Eight Sacred Choruses in Memory of Boris Pasternak represent the work of the dissident composer Nikolai Karetnikov, and the survey comes up to date with the figures of Yan Burakovsky, a tragically short-lived pupil of Alfred Schnittke who died in 1983, and Valery Kalistratov, born in 1942. The set is a unique, compact but comprehensive survey of a musical genre revealed to be much more various than its conventional associations with low basses and dirge-like hymns: an essential acquisition for any choral-music enthusiast.

“The liturgy of St John Chrysostom is one of the most exalted works of art. Anyone following the liturgy of the Greek Orthodox service attentively trying to comprehend the meaning of each ceremony will be stirred to the very depth of his being. I am also very fond of evening prayers. There is nothing like entering an ancient church on a Saturday, standing in the semi-darkness with the scent of incense wafting through the air, lost in deep contemplation to find an answer to those perennial questions: wherefore, when, whither and why?". This quote by Tchaikovsky sums up the emotional impact of the Russian Orthodox music upon listeners all around the globe: the deep sincerity and spirituality of this eternal music.

Sung by the best Russian choirs, such as the Rybin Choir and the Dumka Choir.

An excellent introduction to Russian Orthodox music. The singing is earthy, passionate and blessed with those uniquely low basses.