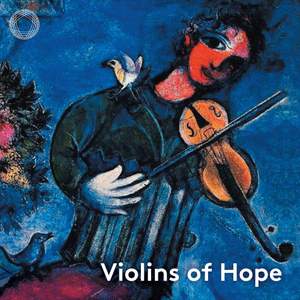 Heggie accomplishes the task with incontestable fluency, opting for a musical language that marries the contours of Jewish melody with popular idioms…Whether the music penetrates fully the horror... — BBC Music Magazine, March 2021, 4 out of 5 stars More…

Heggie: Intonations (Songs from the Violins of Hope)

Recording of the Week,  Violins of Hope

Instruments previously owned by Holocaust survivors and restored by the Weinstein family sing with a special power in Schubert, Mendelssohn, and a new work by Jake Heggie which tells their stories.

Violins of Hope presents instruments that were owned by Jewish musicians before and during the Holocaust, representing strength and optimism for the future during mankind's darkest hour. They have been refurbished by luthiers Amnon and Avshalom Weinstein, founders of the Violins of Hope project. On this album, recorded live at Kohl Mansion, the instruments are used to perform two string quartet masterpieces by Schubert and Mendelssohn, alongside a new composition by Jake Heggie, inspired by the violins histories. Schubert's unfinished Quartettsatz is often considered Schubert's first mature work, and displays a typically Schubertian mix of impetuous agitation and sublime lyricism. Mendelssohn wrote his Quartet in F Minor as a Requiem for his deceased sister Fanny, not knowing that tragically enough he would follow her fate only two months later, at the age of 38. These two captivating works are performed by Kay Stern, Dawn Harms, Patricia Heller and Emil Miland, who join forces with mezzo-soprano Sasha Cooke, violinist Daniel Hope and the young violin talent Sean Mori on Heggie's INTONATIONS: Songs of the Violins of Hope. The recording took place in the context of Holocaust Memorial Day 2020.

Heggie accomplishes the task with incontestable fluency, opting for a musical language that marries the contours of Jewish melody with popular idioms…Whether the music penetrates fully the horror is for each listener to decide; but there’s no gainsaying the power and sincerity of the performance headed up by the probing mezzo of Sasha Cooke and impassioned eloquence of the aptly-named solo violinist Daniel Hope.

The performance here, recorded live at its premiere, is remarkable for being as polished as it is ferocious.

It’s Heggie and Scheer’s remarkable new work that lingers longest in the memory: as with their previous collaborations, the treatment of difficult subject-matter is unfailingly direct and sympathetic, avoiding the pitfalls of either crassness or sentimentality, and hearing it performed on some of the very instruments it depicts is moving in the extreme.