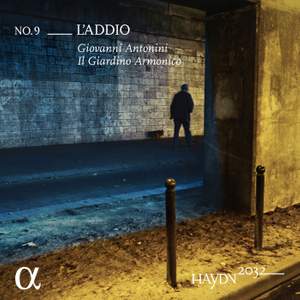 Antonini’s standing among the most vital of current Haydn conductors is as evident here in the hushed intensity he brings to the remote Adagio of the Farewell Symphony as it is in the driving... — BBC Music Magazine, March 2021, 5 out of 5 stars (Performance) / 4 out of 5 stars (Recording) More…

Haydn: Symphony No. 35 in B flat major

This ninth volume of the Haydn2032 series focuses on the composer’s psychological subtlety in its focus on a central work: his Symphony no.45, known as the ‘Abschieds-Symphonie’ (‘Farewell’ Symphony), composed in 1772. It is said to have got its nickname from a symbolic message Haydn conveyed to Prince Esterházy when he and his orchestra were required to stay longer than planned in the Prince’s summer residence. On the occasion of the symphony’s first performance, Haydn had arranged for the musicians to leave their places one by one during the final Adagio. The day after the concert, all the musicians were able to return to their families and bid farewell to the Prince, who had obviously taken the point of this poetic request for ‘liberation’ expressed in music.

The programme is completed by Symphonies nos. 15 and 35 and a cantata sung by Sandrine Piau, the heart-rending ‘Berenice, che fai?’ on a text by Metastasio that was a real ‘hit’ of the eighteenth century, set by some forty composers.

Antonini’s standing among the most vital of current Haydn conductors is as evident here in the hushed intensity he brings to the remote Adagio of the Farewell Symphony as it is in the driving impetus with which he dispatches its turbulent opening movement, and he draws a remarkable range of expressive nuances and powerful shocks from the modest period forces of Il Giardino Armonico.

The vivacity and accuracy of Giovanni Antonini and his period-instrument players can be taken for granted but their identification with these exploratory works makes this disc a standout even by the standards of the series so far...It’s a bold and brash performance [of No. 15], brightly lit and vividly coloured by Alpha’s focused engineering. The Farewell is the work that comes up against the fiercest competition but these musicians need fear nothing in comparison with any number of other recordings.