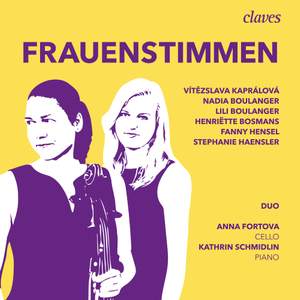 "Fifty years ago, on February 7, 1971, Switzerland finally gave women the right to vote at the federal level. This 100% feminine record wishes to commemorate this event, by remembering also that Claves was created in Switzerland (in 1968...), by a woman: Marguerite Dütschler !" - Patrick Peikert Compositions from both East and West here bring together the powerful voices of six women composers from contrasting cultures. Their music ranges from the Romantic period via Impressionism and Neoclassicism to the present. Vivid impressions alternate with absolute music, strict sonata forms with free forms full of delicate musical poetry.

The standard repertoire of the 19th and 20th centuries, dominated by the male “Bs” Beethoven, Brahms, Bruckner, Bartók and others like them, is increasingly being freshened up by works either long forgotten or suppressed that were composed by women who just happen to have the same initial for their surnames, such as Grażyna Bacewicz, Agathe Backer-Grøndahl, Elsa Barraine, Amy Marcy Beach, Sylvie Bodorová, Mel Bonis, Henriëtte Bosmans, Lili and Nadia Boulanger and Joanna Bruzdowicz.