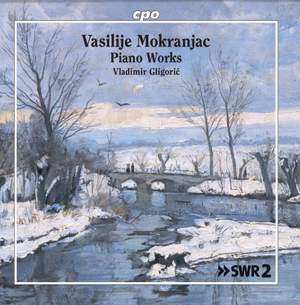 Vasilije Mokranjac numbers among the most important Serbian composers of the second half of the twentieth century. In his initial works he clearly had late Romanticism and Impressionism as his models and enriched them with folkloristic elements. With time he experienced a stylistic development that led to a moderated form of modern expression – and so it also was in his piano compositions. The combination of ambitions as a composer and as a pianist marked his first period during the 1950s, a decade characterized by folkloristic influence. After the expressionistic supercharging that was the hallmark of his second compositional period, his music took a completely different turn during the 1970s: this third and last period of Mokranjac’s full compositional maturity witnessed his return to the piano and culminated in some of the most complicated works ever written for this instrument. The folkloristic elements typical of his early compositions as well as the forms of expressionistic tension from his second compositional period are lacking in these piano pieces. Lyrical expression is now what predominates. It also seemed as if the mystical, highly meditative, and increasingly sonorous pieces of this last period had a communicative agenda: with them their creator wanted to convey his reconciliation with the world – when then, out of a deeply hidden sense of mounting existential anxiety, he took his own life on 27 May 1984.