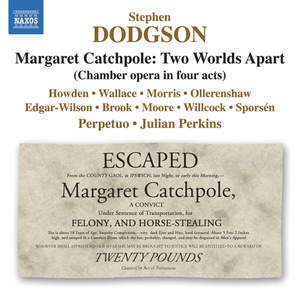 Australian mezzo-soprano Kate Howden provides Antipodean representation – and much more besides – as Catchpole. William Wallace beguiles as bad boy Will Laud and Alistair Ollerenshaw is strong... — BBC Music Magazine, March 2021, 5 out of 5 stars (Performance) / 4 out of 5 stars (Recording) More…

What an Almighty Fuss

For So Many Years

Under That Far and Shining Sky

The Harvest Is Ended

The Ripen'd Corn in Sheaves Is Born

I Don't Care What You Think

Luff? Are You There?

Heard You That, Old Man?

Prisoner at the Bar

My Lord, My Testimony Has Said I Am Her Employer

I Know, I Know

Prisoner at the Bar

My Lord, Always to This Court I Have Confessed My Guilt

Mrs. Cobbold... Before You Speak

Ever Since I Came to This New Land

John... Oh, I Never Thought to See You Again

Oh John... I Am Almost Afraid

The conductor talks to Katherine about the world première recording of the 1979 chamber-opera Margaret Catchpole, which tells the story of a Suffolk servant-girl who was deported to Australia for stealing a horse in the late eighteenth century.

Among Stephen Dodgson's portfolio of more than 250 works are chamber operas, of which Margaret Catchpole: Two Worlds Apart is a most striking example. It is based on the true story of a woman who was convicted of the then capital crime of horse stealing and transported to Australia, and Dodgson conveys the romance and drama of the story with characteristic lyricism and rhythmic energy. Words are paramount for Dodgson, and his setting is vivid, immediate and tonal, with some swaggering rustic moments amidst the precise characterisation and idiomatic instrumental writing.

Australian mezzo-soprano Kate Howden provides Antipodean representation – and much more besides – as Catchpole. William Wallace beguiles as bad boy Will Laud and Alistair Ollerenshaw is strong as the reliable, eventual ‘public benefactor’ John Barry. Unusually for an opera with an eponymous heroine, there’s even a happy ending.

The Perpetuo ensemble play beautifully throughout, the whole directed impeccably by Julian Perkins.

Small gestures make an effect, and he uses his limited forces (11 players, skilfully marshalled here under Julian Perkins) with discretion…Howden colours in the determination of Catchpole herself. The tenor William Wallace maintains a convincingly lyrical approach as her dubious (if not disastrous) admirer Will Laud.