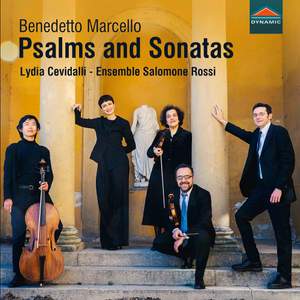 The performance by Lydia Cevidalli’s group is, without question, excellent. The diction in the vocal works is clear, and the performance of Marcello’s sometimes variable lines sensitive to the... — Fanfare, September/October 2021 More…

No. 5, A me sol tocca una diversa sorte

No. 10, Intonation of the German Jews over the Prayer

Marcello, B: Harpsichord Sonata in G Minor, S. 736a

No. 5, Sopra di me diffondasi

Benedetto Marcello was born in Venice in 1686 and died in Brescia in 1739. His vast musical output remains largely unexplored, but his most famous work is the Estro poetico-armonico a collection of 50 psalms, including 11 ancient Jewish songs (called Intonazioni) and two sacred hymns from Greek classicism. Marcello acknowledged the importance of Jewish and classical music heritage, and by blending these different styles he sought to underline their universal value. This album features Psalms Nos. 21 and 42, as well as the Sonata for Violin and Basso Continuo in E minor Op. 1, No. 1, and the first movements of Sonatas No. 5 in F major and No. 4 in G minor for solo harpsichord. Founded by Lydia Cevidalli in 1991, the Ensemble Salomone Rossi has performed in Italy and abroad, notably in Belgium (at the Concertgebouw in Bruges and Chimay Castle), in Spain (at the Real Academia de Bellas Artes in Madrid and in live broadcasts for Spanish National Radio), and in the United States (at Montclair State University). In recent years, the ensemble has recorded the music for the BBC documentary The Story of the Jews, together with Jewish baroque music and the first volume of Marcellos Psalms and Sonatas.

The performance by Lydia Cevidalli’s group is, without question, excellent. The diction in the vocal works is clear, and the performance of Marcello’s sometimes variable lines sensitive to the emotions of the text. The strings, one on a part, add the color whenever they are required, and intonation is absolutely precise. Highly recommended.