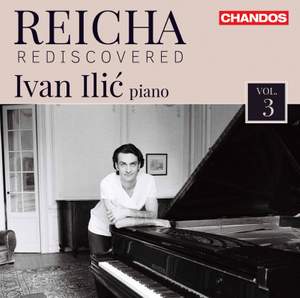 For almost 90 minutes [Reicha] subjects a simple, songful theme to the most kaleidoscopic imaginable treatment, and – thanks in part to the freshness and clarity of Ilić’s playing – the wonder... — BBC Music Magazine, February 2021, 5 out of 5 stars More…

The pianist talks to Katherine about the third volume of his acclaimed Antoine Reicha series on Chandos (released last Friday), which features just one work - an extraordinary set of 57 variations composed in 1802–03.

For this his third volume of works by Antoine Reicha, the pianist Ivan Ilic turns to one of the composer’s most extraordinary works, L’Art de varier, Op. 57. ‘The Art of Variation’ consists of fifty-seven variations on a theme (that the number of variations match the opus number is not a coincidence) and was composed in 1802 – 03, at the beginning of the six-year period which Reicha spent in Vienna, where he studied with Haydn and re-kindled his previous friendship with Beethoven. The set is remarkable for its scale and invention. Ivan Ilic describes the work as the missing link between Bach’s ‘Goldberg’ Variations and Beethoven’s ‘Diabelli’ Variations, which was certainly influenced by Reicha’s work. The recording was made at Potton Hall in Suffolk, on a Steinway Model D grand piano.

For almost 90 minutes [Reicha] subjects a simple, songful theme to the most kaleidoscopic imaginable treatment, and – thanks in part to the freshness and clarity of Ilić’s playing – the wonder is that I don’t get bored...The first variation is a demure little embroidery on the theme, and the second thunders in Beethovenian style. Then, after establishing these polarities, he’s off on a voyage full of drama and incident...Reicha’s invention never flags for a moment.

Ilić not only observes every repeat but also varies his touch, voicings and phrasings on the second passes. He keeps the contrapuntal repartee between the hands consistently vibrant and alive...the engineer’s superb concert-hall realism helps enhance the fresh characterisations and imaginative use of tone colour that Ilić consistently brings to this fascinating opus. The booklet notes prove just as insightful and entertaining as Ilić’s overall artistry. A major contribution to the catalogue.

L'art de varier is an expansive work that demands a performer immersed in his music, and none fit the bill more than Ilić, whose care and devotion shine through every note. His translucent sound is ideal for this repertoire...Illumination is key both to Reicha's processes and Ilić's playing. This is not the work's first recording but it is the most authoritative.

It’s not only Reicha but Ilić himself who gives us a genial masterclass in ‘the art of variation’ on this quite extraordinary account of an extraordinary work: though all 57 variations were recorded on a Steinway Model D, such is the range of touch and colour that there are moments you’d swear he’d switched to an Érard, a Broadwood, or even (for some of the unexpectedly jazzy movements) a modern upright with a colourful past. 80 minutes flies by in such imaginative company.